Click to view the January 2020 update on the Project

UPDATE_FWPP_Jan20_Did-You-Know-1Download
See attached Report for the latest information on Project status and the impact of the recent Museum Fire. (This version is a revised edition of one posted previously.)

The Museum wildfire, which began July 21st, is currently still burning in the Dry Lake Hills area north of town. It is a difficult, challenging, and extremely unfortunate event.  While the cause remains undetermined at this point, rest assured that all leads are being followed as the investigation continues.

City and Coconino National Forest personnel have been working diligently over the past few years to implement planned forest treatments.  As of last week, we were just shy of 50% completed within the Dry Lake Hills area (approximately 65% completed project-wide).

The fire will continue for another week or more before full-containment.  Some initial reports are that some of this completed work had some positive effects on fire spread and intensity, but

In the coming weeks, we will work to assess the impacts of the fire on the Watershed Project, and we’ll share those results once known.  What we can say right now, however, is that it could have been far worse.  We are very grateful to the Southwest Incident Management Team #2 for their professionalism, effectiveness, and sensitivity to our community and the Project.

Following that assessment, we’ll re-engage and carry-on. We have on-going work that still needs to be completed, and areas where planned work remains to be done.  Our objectives and commitment remain unchanged.

The Coconino National Forest has issued an updated press release regarding the forest closure in the Dry Lake Hills and Mount Elden areas.

Please note that there is increased access for recreation in some areas, but active areas of the project are still closed for public safety! Please respect all closure signs and stay out of closed areas.

To get an update on what has changed, what is open, and what is still closed to the public, please read the updated forest closure press release below:

To read the official Area Closure document, please see below:

Coconino National Forest has issued a closure order for an area of the Flagstaff Watershed Protection Project that includes Dry Lake Hills and a large portion of Mount Elden in order to keep the public safe from forest harvesting operations.

The public is restricted from entering this closure area so that helicopter logging and forest thinning operations can be conducted safely.

The closure area also affects all or portions of trails, including:

Harvesting operations are expected to conclude sometime this summer. Violation of these prohibitions is punishable by a fine of not more than $5,000 for individuals and $10,000 for organizations and/or imprisonment for not more than six months.

On Thursday Aug 23rd, USFS Volunteer and FWPP partner Karen Malis-Clark lead a field visit through both the recently completed portions of the hand-thinning and mechanical harvesting areas at the base of Mt Elden. 40 engaged community members showed up to walk through the site, including several participants from a neighborhood immediately adjacent to the project area.

There was extended time for Q&A and deep discussion, with many expressing their “thanks” for providing this field opportunity for this important project. Thank you to our community for coming out to learn more about FWPP and thank you for bringing all the great questions and perspectives. Thank you Karen for being a great field visit leader! 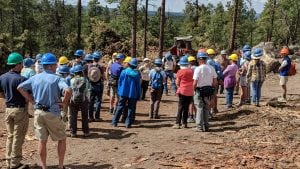 The Flagstaff Watershed Protection Project (FWPP) along with other forest thinning efforts are highlighted in this recent report by the AZ Republic. In addition to FWPP, the article examines other ongoing forest thinning and fire risk reduction efforts in Northern Arizona.

Additionally, the article addresses some of the honest truths about the work FWPP and others are doing. Moving forest thinning forward in challenging terrain and across a large scale is expensive and full of challenges. FWPP would not be possible without the hard work of so many other organizations and dedicated people trying their best, despite the challenges, to move our forests in the right direction. Please take 15 minutes to read about it!